Depression is NOT a Normal Part of Aging

Then Why Is It So Prevalent at Our Seniors Residences?

Depression affects an estimated 15% of persons ages 65 and older. The World Health Organization reports that late life depression effects 7% of older people worldwide. While these statistics on face value don’t ring the alarm, it’s estimated that upwards of 90% of seniors don’t receive adequate care for depression, with 78% not receiving any kind of treatment at all. The financial cost of misdiagnosis or mismanagement of geriatric depression is enormous with research saying it worsens co-existing physical illnesses, hastens mortality and increases the rates of suicide by death for seniors.

Statistics for those 65 years or older who have subclinical depression – having many symptoms but falling short of making a clinical diagnosis – approximates 25% of the geriatric population. This is a particularly startling number that carries with it an equally startling fallout because there are more seniors with subclinical depression than those with a diagnosed depressive disorder. And what’s even more alarming is that seniors who have subclinical symptoms are not identified early, and therefore, not treated appropriately. Studies show that a long untreated subclinical depression of up to 3 years will lead to a major depressive episode. The single cause for this oversight is that many people, health professionals included, believe that depression is a normal part of aging.

In fact, this is one of the greatest myths about aging found the world over.

How to Identify Geriatric Depression

Greater understanding of geriatric depression comes with identifying three specific areas:  1) Behavioral symptoms, 2) Physical symptoms and 3) Cognitive symptoms. Take a look at the list below and learn how you can help diagnose depression in later life for yourself or a loved one.

Geriatric depression can be difficult to diagnose, but knowing the symptoms leads to early identification. With proper treatment, the golden years can remain a meaningful chapter in your life. 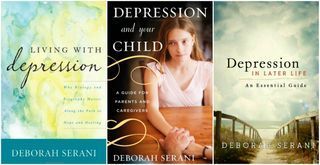 Dr. Deborah Serani is author of the award-winning books “Depression and Your Child: A Guide for Parents and Caregivers,” “Living with Depression” and “Depression in Later Life.”